If you’ve visited the farm, you’ve almost certainly been inspected by Commando, the herd wether. I’ve been asked plenty of questions about him – this fellow looks like a Nigerian Dwarf, but is as large as the standard does, and is heavily moonspotted, making him really stand out in the crowd. What’s the reason for keeping a herd wether at all, even one so unusual and friendly? Commando’s beginnings are amusing to think back on, especially when I recall he had quite a different name before we moved to the dairy.

To really understand Commando’s past fully, you have to go even further back! His granddam was originally owned by a neighbor of mine who I often helped out, at the farm we had before we moved to the dairy. Her name was Pixie, and she was a Nubian x Saanen cross. This pretty lady was a good milker for her owners, and eventually they crossed her with a Nigerian Dwarf buck.

However, when it came time for Pixie to kid, she chose to do it somewhere in the depths of a three acre wooded lot, and returned home without the kid, setting off a late night search party that I joined in on. It’s quite an experience to be combing through pitch black forestry looking for newborn kids – I can’t recommend it!

The single doeling was eventually found, safe and sound. The little chocolate kid was soon dubbed “Bunny” because that’s just what she looked like when she was found: a tiny little damp bunny tucked in the underbrush.

A couple of years later, Bunny and her dam Pixie would join my own herd. Shortly afterward unfortunately Pixie had an accident and passed away at the farm I took her to to be bred, but her daughter Bunny remained with us, and when I brought home Blizzard, she was one of the first does I put him with.

Bunny delivered a little buckling – Blizzard’s first son – and a doeling. The doeling was adorable, and soon went to a new home with a friend, but for some reason I just didn’t bother finding a home for the buckling. He was born nearly completely black with a few white markings, but within days, small chocolate spots appeared. As I was still new to moonspotting and Nigerian Dwarf colorations, I was curious as to what was happening color-wise in this kid. But to claim that was the real reason I kept him around was a lie.

Commando – though he had no name at the time – was kept to be a “practice goat.”

You see, I’d just gotten a fancy new “toy” – a disbudding iron. When I was starting out with goats, there were no Youtube videos, no tutorials, no locals giving lessons, nothing at all about how to disbud beyond a few forum posts with pictures. As everyone is when presented with the idea of disbudding, I was apprehensive about doing it myself. I started out by using a piece of plyboard to get a feel for the way the tool burned, but I knew eventually I would need to try it on a goat. And if I must try something potentially dangerous for the best time, it was best to try it out on an unregistered buck kid, I supposed.

I never named the kid, nor did I handle him very much. He was just part of the herd, dam raised, wild, though very cute. He became quite a handful at times, and when referring to him, it slowly changed from “that spotted kid” to “that spotted bastard.”

Until we moved to the dairy, that was simply his name. The Spotted Bastard.

His disbudding went very successfully, and I learned quickly that it wasn’t nearly as traumatic or as stressful an event as many people made it out to be (both for themselves and the goat kid). A great beginning to what would become a rather extensive disbudding career I have to say, having now done well over a thousand kids.

As he grew, his coloration changed nearly by the day – what started as small areas of chocolate or cream spotting spread across his coat, until he was almost more chocolate than the black he originally started out with. His days as a practice goat did not end with disbudding, either. Though I’d banded bucklings before, he was the first I was able to observe the entire process with, as all others had gone to new homes after their bandings. I was learning more about testing for various health problems at this time too, and that wriggly spotted young wether was held still by my husband while I poked him multiple times with needles until finally I hit the vein and drew forth his blood. Another first of what would become hundreds, if not thousands. The first copper boluses were crammed down his throat as well, and the difference it made in his ever-changing coloration was awesome!

Despite being used as a test dummy for the other goats, the young wether slowly became friendly. As I began to get a better idea of my goals for my herd, his dam went on to a new home, but he remained. Despite being mostly Nigerian Dwarf, he soon grew much larger than all of my other goats, until he could rightfully be called a small “standard” sized goat. I’m still not sure how that happened – his sister grew to a proper little Nigerian Dwarf size after all! I became rather fond of that spotted little troublemaker, and as he matured, he began to show interest in the does when they were in season, which is quite common among wether goats. When hand breeding goats, a wether can be a valuable key to spotted does in estrus, and can of course live among the does “safely” since he cannot impregnate them. This gave me a legitimate reason to keep him around at least!

When it came time to move the goats to the dairy and begin my job as a goat slave – er, manager – I knew I simply could not introduce him to my new employers and friends as “The Spotted Bastard.” He had to have a real name!

With such a cool “camouflage” fur coat, his bossy demeanor, and his role among the does, the name was obvious. I dubbed him Commando, and he arrived at the dairy with a respectable title, and his eyes no doubt bugged even further out of his head at the sight of the big herd of does he’d now call his own.

He made himself at home right away of course, referring fights between the does, babysitting the young kids, and wearing the tracking tag when the herd went out to browse. He fixated himself as a solid member of what defines K-N-S Farm, and has indeed become quite a popular member of my personal herd. I hope he’ll spend many more years with us, and if you ever come to visit, be sure to give him a few head scratches – though once you do, you’ll never be rid of him until you leave! 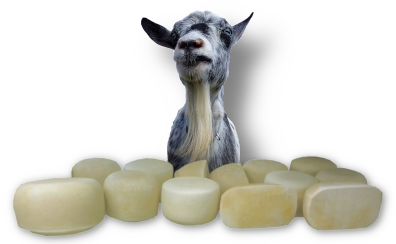 I am also the stock manager at a dairy that produces cheese for commercial sale. I am responsible for the care of almost 200 goats, everything from their conception to their death, and I love it.

I also am passionate about sharing my love and knowledge of the caprine species with everyone who has a desire to share their lives with them as well. Goats are challenging animals, with little official research and a difficult learning curve. It's our responsibility to band together and share information as we learn it.

Here on this blog I share my experiences, adventures, and failures in the goat world. I don't shy away from any aspect - this includes birthing, breeding, and death.

You can also choose to donate directly through Paypal by clicking below.

We absolutely appreciate your support, in every form! We do what we do for you.